A downloadable Visual Novel for Windows, macOS, Linux, and Android

Lyre is a romance furry visual novel story where you travel to a strange kingdom as a human ambassador, surrounded by diverse characters. Your only weakness is that you have no idea what their motives are. They're all deceiving each other and every one of them is better at it than you. You find yourself only able to trust the most unlikely individual as a terrible plot unfolds around you.

Written and Illustrated by Atmac

The enchanting music is done by Augustovich

Here is the link to the Discord

Game crashes on Android for no apparent reason. Can't boot for longer than 5 seconds. Otherwise seemed like an interesting game lol

Maybe It's the device? It works just fine on my tablet.

I'm on a Samsung, so I don't see why this would happen.

If it helps, I'm going to try and fix problems like this in the next build.

Little suggestion: I think you should add a little easter egg or memorial in the story for Mayer like idk add a graveyard of those who passed and the main character will read some of the grave stones while looking around idk its just a suggestion anyways look to the future and think positive and think of Mayer as motivation to continue on and may Mayer rest in piece.

May your friend rest in peace, my dog just passed away just yesterday and it was really hard for my family to lost our dog. May your friend soul fly to heaven.

Can we able to date John the red wolf?

Will this visual novel be in Spanish? I read that comment about using a program or something like that but unfortunately I don't have a pc and I would like to know if there will be a Spanish version or a way to translate it En es spanish for android please

Take your time creating new content. It's worth the wait. I really like this visual novel so far👌🏽😆💚💚💚💚💙. I'm so excited for what will happen in the future🧐🏃🏽‍♂️🏃🏽‍♂️🔥

I enjoyed playing this. Simply put, I would say that it does not contain the same pitfalls that a couple other VNs that I've read do. Character development and plot advancement are blended together nicely. The scene with the Lyall sticking his muzzle into the door in particular was pretty funny. There are plenty of other good moments in the game. Overall, it was enjoyable, and I would recommend this.

I TRULY Enjoyed this.

i know you probably get this question alot.. but what is the update schedule? ive tried looking everywhere for one. its alright if there isint one but i just wanted to ask :3

There is no update schedule. They usually take 1-3 months to make depending on the amount of content. I also like to announce the update 1-2 weeks before it releases for Patrons.

alright! thank you for letting me know! love your work! if this game comes at a price when its fully out i would so get it! ^-^

i am going to be honest. i love this. like alot. love lyall and his big snout through the peep hole. deserves a big ol boop. the way mc went about the dream/vision thing was kind of weird to me and over the top, but that may just be me :3 you are doing a wonderful job. id like to see maybe a secret route for the best little plague doctor ( we all know who that is lol ) keep up the amazing work!

i cant wait for the next chapter!

downloading the file takes too long and then it fails midway

I think It's a Ren'Py thing, because it does that to me with different VN's.

maybe... the other games download faster even at larger files

Talk about a cliché Adastra ripoff

Stfu and actually play the game

Quick question...have you played it?

Damn, I must have missed all the sci-fi interplanetary stuff. Seriously, go troll somewhere else.

maybe play it? just because he is a wolf doesint mean that it is a ripoff. the story is in a completely different setting with different story and their own characters. you cant copywrite a species. before hate commenting please play it first before you start to angry comment. this is honestly in my top 10.

English not first language, but if what I understand it is very well written and great drawing too, visuals are great! congratulations Atmac, great reading so far my friend!

Will it have nsfw in the future?

There should already be some NSFW depending on how far in you are.

Hello, I don't know if it's a normal problem but, in android device , the touch pad doesn't work.

This is a common problem, unfortunately it's not anything that I can fix on my end.

OK, don't worry. I will play it on the big screen for that beautiful boy 😉

Wait is the android version updated or not?

I love this game! I just finished what is out so far and I can’t wait for more! In my spare time I’ve actually doodled a few drawings of a headshot of Lyall! I’m actually really into anthros and furries (more so anthros) and the middle-ages so this really drew me in! I thought it was funny that my mascot is a Deer and the King is a stag lol

So far loving this vn. The sprites are well drawn and cute and I love the way the story is going so far and lyall is amazing.❤️

A great work and I'm looking forward to new updates! Thanks for the hard work.;D

In spite the fact that I'm a project member, Atmac makes all things for Lyre by oneself, and I think and as a partner and as a content consumer that he does an absolutely amazing job. If it were not for the quality of script and art, I would not have composed music for this. I'm proud to be in this project, and I will be interested to know what will happen next <3

Rest Friend, know you will be missed.

Before giving any critique, I want to say that this is probably one of my favorite visual novels ever, and has some amazing potential. Alas, I want to give some critique due to the fact that I want this to be better. Art is really nice and cute, and visual element is pretty much perfect.

Now the writing is where I have a few nitpicks. There are some spelling mistakes, they don't distract from the story but I would like to see them ironed out at some point.

Pacing is weird, like how the first two days are more or less complete, and then the following week or so passes in a few sentences, there are some obvious time skips when the writer wants to progress things, which feel out of place. I would hope for smoother or more subtle transitions in the future.

Lyall is my precious cute wolfman, but he feels somewhat two-dimensional, with some clear inspiration being taken from characters of similar games like FBTW and Adastra. I am not saying that he is a boring or a cookie-cutter character, but I would love to see some more development to his personality in the future.

With all that being said, I want to reiterate that these two points are subjective, and others might disagree. My point is to give some critisism towards areas that I myself find lacking, and not to just say this for the sake of being mean.

Atmac, this is an amazing game, with more potential than the counterparts I compared it to. I really want to say that I appreciate what you have done so far, and I hope you will turn this into something amazing.

I'm glad you like it. I didn't take inspiration from any FVN characters when making Lyall though. I actually made Lyall before I even got into the FVN community and had been writing him for a while. Kinda harsh to call him two-dimensional when his story isn't even finished yet. Also, I have the whole timeline planned out and the pacing is the way it is for a reason. Time skips are essential in stories like this. I'm not going to cover every single day because some days are just not worth covering.

Been playing this since the first chapter. It just keeps getting better!

I'm glad you're enjoying the ride!

I'm really looking forward to what's upcoming next. The story is very intriguing! <3

===Tiny Spoiler for this update ahead===


So with the galley being added, is it going to stay as all independent images of a scene or will you add scene collages? Taking the dream for example, Instead of all single images, they can be put together into one collage where you can just click next to see the next illustration? If they all stay independent, that's fine too, just a genuine question. Love the visual novel so far!

I would like to try and do that at a later date.

This is Chapter 5 right? I'm gonna guess it's bugfix or typo correction.

This is a new chapter, not a bugfix or typo correction.

every time i try to run the program it closes
can anyone help?

I have a problem, on mobile touch doesnt work so have to go on a pc

Alcohol, a great enemy or ally depending on the situation.

AYE AYE AYE YOW MC CHILL YO ASS DOWN IT HAS BEEN LIKE 2-3 DAYS AND YOU BE LIKE THIS:

It's actually been longer than that....

It's been longer than 2-3 days. Chapter 3 skips forward a week and so does chapter 4.

Is there a NFW scene in the game

Yes, so far there has been one nude scene. 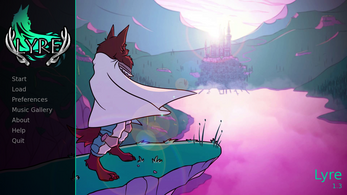 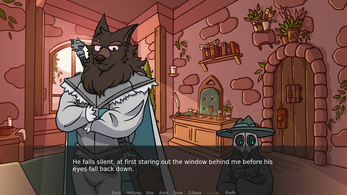 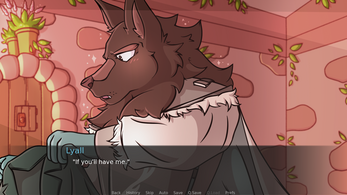 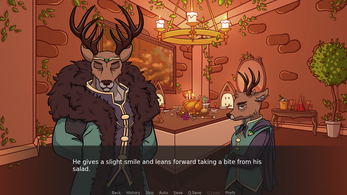